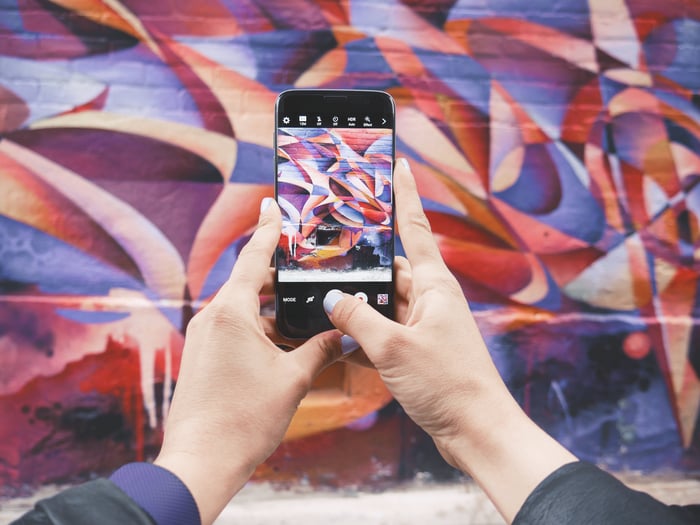 The Largest Influencer Study in the US in 2023

The State of Influencer Marketing in the United States in 2023

But influencer marketing doesn’t just involve celebrities. While the mega stars may get the most attention for their big-money campaigns, in reality, influencer marketing is far more widespread. In fact, these days, some of the most valuable influencers would never consider themselves famous in an offline setting.

What are you waiting for? Let’s dive into the state of influencer marketing in the USA.

To determine the number of Instagram users who could be considered influencers, we first sought to define the term “influencer.” According to Influencity’s definition, an Instagram influencer is any profile that has some sway over its target audience. Users develop this authority by having specialized knowledge or expertise in a particular subject, such as tech, travel, food, or beauty products.

In order to make our definition more measurable, influencers were also defined as those over the age of 18 with public profiles and over 1,000 followers. Although it’s possible that not all of these profiles have been engaged in an influencer marketing campaign, their reach and status would make them eligible to do so.

As mentioned earlier, influencer marketing is no longer exclusively the territory of celebrities. In fact, as the sector diversifies and becomes more professional, so do the terms and criteria used to define different types of influencers:

Mega-influencers: profiles with 1 million plus followers

To further segment these profiles, we divided each category by gender: male, female, and no-gender. A “no-gender” influencer is any profile where the user's gender is not clearly evident or not relevant to their status as an influencer. This could include non-binary persons, pet accounts, or even brands.

To gather real-time data on the number of influencers in each category, gender, and US state, we used Influencity’s own software. Influencity’s AI-powered platform uses image recognition and natural language processing (NLP) to understand data on any profile worldwide and other types of data publicly available.

By setting filters to narrow down the number of followers, location, and gender, we were able to reduce this vast pool to know the exact number of male, female, and no-gender content creators in each of the 4 categories above.

When Influencity first carried out this study in 2020, Instagram users represented approximately 21.7% of the total US population. That means that 89.9 million Americans had at least one active Instagram account during that year.

Two years later, this figure has increased to 103.7 million users, a whopping 31.6% of the US population. This increase is due to a number of factors. For starters, the Covid-19 pandemic pushed everyone inside and onto their phones. Face-to-face interactions were quickly replaced by social media publications and short-form videos.

Secondly, younger generations are growing up and logging on. While TikTok is the clear favorite among younger generations, enjoying 3 billion downloads worldwide since its launch, Instagram is still holding strong. Many Millennials and Generation Z users (those born between 1995-2009) use both apps to connect, shop, and find entertainment. 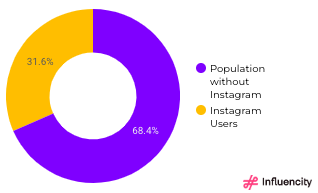 The outsized impact that these two states have on the US influencer scene is no doubt due to the world-famous cities in each one: Los Angeles and New York City. Actors, musicians, and other celebrities flock to these locations in search of fun, fame, and fortune and many use Instagram as a platform to connect with their audiences and promote their work.

The impact of these two states on the market is most pronounced in the macro- and mega- influencer categories. In fact, 64% of mega-influencers are located in California alone, with another 20% in New York. It’s worth noting that these influencers may not necessarily be California or New York natives or even US citizens, but rather celebrities who have come to call these states their home. Nevertheless, they are still very relevant to this study for the products and services they promote within their communities.

Nano-influencers continue to make up the vast majority of profiles, decreasing only slightly from 93.7% in 2020 to 93.1% in 2022. This marks a contrast to the results of our State of Influencer Marketing in Europe study, where nano profiles fell in comparison to micro-influencers as these smaller profiles gained fame and amassed followers. 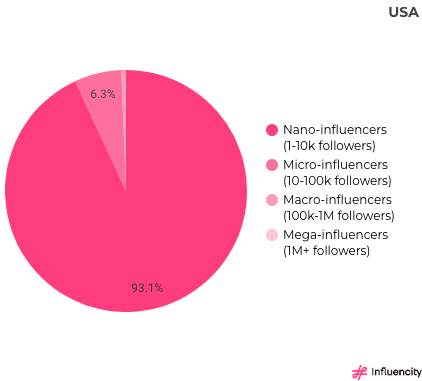 Population continues to be a solid indicator of both the number of Instagram users and the number of influencers in each state. The exception to this rule continues to be Georgia, which has the 5th highest number of influencers despite being 8th in the country in terms of population. As in 2020, the Peach State’s largest city, Atlanta, didn’t even make it into the US’ top 10 cities, making its 5th-place status even more surprising.

In this year’s edition, we wanted to take our investigation a step further and examine not just the number of influencers, but the percentage of content creators in any given state’s total population. This gives more context into a state’s “influencer density,” or how prevalent these content creators really are in these areas.

As you can see in the right-hand column, New York has a higher influencer density than California. What’s even more interesting is the states that take positions three to five. Georgia, Louisiana, and Mississippi are 8th, 25th, and 34th in population respectively, and all have very high influencer densities. A relatively small population and a large pool of content creators could explain why these states have the highest percentage of influencers in the nation.

A quick look at the influencer market in Louisiana shows that over 70,000 male nano-influencers and +100,000 female nano-influencers call this state home. While not every profile in this category (1k-10k followers) has been involved in a professional collaboration, it's likely that many have been used to promote local products and services within their communities. The power of nano-influencers should not be underestimated, as these small but targeted influencer profiles are ideal for promoting small businesses at a city or state level.

An All-Female Majority in Hawaii

A surprising result of this study is the demographic distribution of influencers in Hawaii. As seen in the chart below, female influencers make up almost the entirety of every category.

This goes against the norm recorded nationwide, which follows the pattern below. Female content creators usually have a slight majority up until the mega-influencer category, where male content creators are more prevalent. In the United States, many of the male influencers in this top category are professional athletes, celebrities, and politicians.

As the numbers have clearly shown: influencer marketing is enjoying an upward trend. The question that arises, however, is what form the sector will take as it continues its upward trajectory. Consumer preferences change as new trends hit the market and new users join the online world. In order to keep up, both marketers and the content creators they work with will have to continue evolving or risk being left behind.

A key to keeping up with these trends lies in data. Influencity predicts that in 2023 and beyond manual searches and analyses will no longer be sufficient ways to gather influencer and audience insights at scale. Instead, marketers will need to harness the power of technologies that can mimic human analyses – image recognition and natural language processing (NLP) that can be used to cross-check hundreds of profiles in just moments. The influencer marketing campaigns of the future will be driven by data, and platforms are constantly adding to their tech suits to accommodate this need.

Influencer marketing brands and agencies won’t be the only ones benefiting from these technological advancements. Social media networks like Instagram are continuously brainstorming new ways to foster engagement with the content creators on their platforms. This is because these networks recognize the revenue that can be gained by attracting motivated and highly creative influencers. In-app shopping advancements and ways to track commissions are just two of the new offerings that have been introduced in the past yearsI. Our prediction is that new additions to social commerce functionality will continue to appear in 2023.

In line with this prediction is the idea that influencers will soon take over the entire marketing funnel, collaborating on campaigns that allow viewers to buy products directly from a sponsored post. This eliminates the friction involved in directing users to a separate website and filling a cart with various items before proceeding to checkout. This ease of purchase will no doubt boost profits and make content creators an even more essential part of the customer journey.

Finally, while the booming macro- and mega-influencer markets in New York and California show that celebrity profiles have not lost their appeal, the high influencer density in emerging markets shows that small, niche profiles are the best ways to gain a foothold in other areas. As users in these areas increasingly look to social media as a way to find products and services, it’s likely that more businesses will collaborate with nano- and micro-influencers as a way to reach potential customers in their communities.

For a look at all the data used in this analysis, check out the State of Influencer Marketing in the USA report. To stay up to date with influencer marketing trends, check out the Influencity blog.